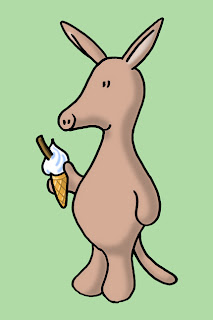 Yesterday morning, Clarissa and I were hopping across the field gathering dandelions for dinner, when we heard a snuffling noise from behind the hedge. Clarissa grabbed my arm.

“Who’s there?” I called out. I knew Clarissa was scared that it might be Bad Fox.

“A is for Aardvark.”

And then out from behind the hedge popped a head: long pointy ears, not unlike mine, and a long pointy nose, nothing like mine.

“I’m Alan the Aardvark. I’ve come all the way from South America to see you. Now isn’t it time you offered me a nice cup of tea; it’s been a long journey.”

“Hello, Alan! Of course you can have a cup of tea; come on back to the burrow.”

Clarissa offered Alan an ice-cream while she put the kettle on to boil, and I drew this picture of our new friend with his cornet.